Master of the Arena

Born in Milan, Gaetano Ciniselli was an equestrian acrobat, a horseman of a high school riding, an animal trainer and an educator. Not only did he perfect diligently in his art, being awarded the title of “Honorary Horseman of His Majesty the King of Italy” (Cavallerizzo onorario di S.M.il Re d’Italia), Cavalier decoration of the Crown of Italy and a personal coat of arms, but he also made his troupe recognized as one of the best in Europe. Successful performances and the attention of the highest authorities allowed G. Ciniselli to apply to the City Duma for permission to construct a stone circus in St. Petersburg, which rapidly acquired enormous significance. On Saturdays, when the debuts of new artists were usually announced, the circus made a traditional venue for gathering the nobility, authorities and the Imperial Guard. The programs were composed with participation of the best artists, mainly from abroad: as soon as a notable performer appeared on the arenas of Berlin or Paris, he was immediately invited to St. Petersburg. 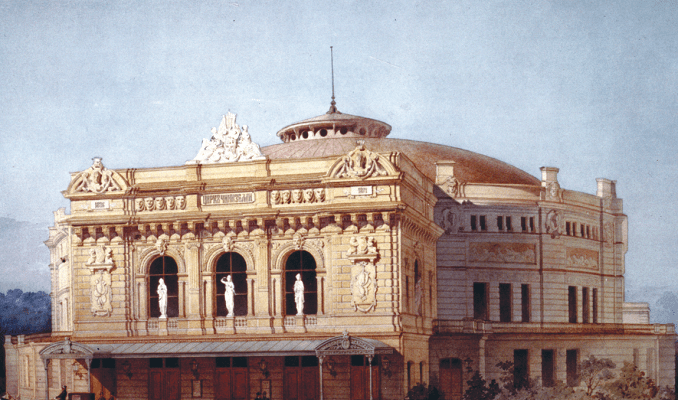 In just four years after the circus construction, Gaetano Ciniselli passed away and his wife Wilhelmina took over the management. She was succeeded by the eldest son Andrea, who enriched the repertoire by introducing pantomimes, ballets, fairy shows, including water pantomimes; librettos and scenarios for these performances were ordered mainly from abroad.

Since 1892, the youngest son Scipione became the circus director; in 1919 he left Russia with his family. His nephews Alexander, Gisella, Andro and Angelo continued performing on the arenas of country circuses in the 1920s. The eldest daughter of Alexander Ciniselli, Emma, married Nicholas Kiss, a juggler and clown, and started a new circus dynasty, whose members come to the arena until present day. 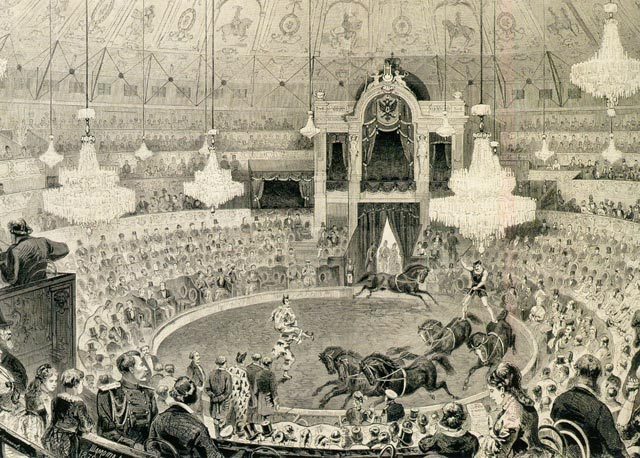 One of the most beautiful circuses in Europe

Ciniselli Circus is the one and only circus building in Russia built in the XIX century, which has survived till our days.

On December 26, 1877 the first brick-built Russian circus projected by V.A. Kenel (Quesnel) was opened. The dome of Ciniselli Circus is attributed to the outstanding monuments of science and technology: a radial mesh metal structure of the I.V. Schwedler’s system made possible erecting a dome of 49.7 m span without internal support columns for the first time in the world. The building was resolved in techniques of eclecticism prevailing in the 1870s. The exterior paintings depicting ancient stadiums and medieval tournaments were supported by picturesque frieze, imitating sculptural bas-reliefs was supplemented with haut-reliefs of horse heads, and at the ends of the main entrance – with plaster sculptured panels depicting jugglers (on the left), and acrobats (on the right). The Italian sculptor E. Butti created the muses in the apertures of arched windows and the “Art” group crowning the main façade. The spectator hall was decorated with luxury worthy of Imperial theatres with gold, mirrors and crimson velvet all around. An undisputed adornment of the interior was the Royal box with caryatids. Soon after the Russian October Revolution part of the magnificent “royal” decorations was lost. 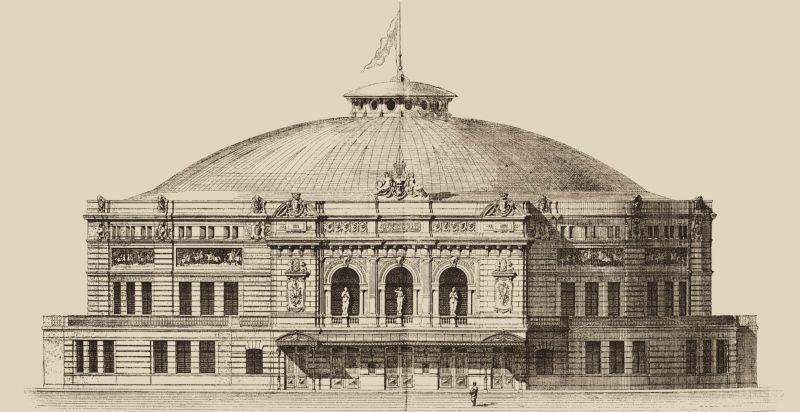 In 1959, the major reconstruction of the building was launched. For the convenience of spectators and for the purposes of fire safety, foyers and cloakrooms on the first and second third floors should be arranged. For said purpose, the external one-storey gallery was extended on the entire height of the building. These new walls altered the ratio of the building volumes, thereby distorting their harmonious combination. The façade and ground floor lobby were extremely simplified, with no more caryatids decorating each side of the rectangular columns. A canopy of multicolored neon lamps was made to replace the fence roof with carved cast-iron pillars, and in 1963 a huge glowing sign “CIRCUS” was placed in the center of the pediment. By 1963, the total area of the building increased by 2 000 sq. m. The unique dome was revamped. The roof cover composed of wooden flooring, cork insulation and metal sheets was dismantled and a reinforced concrete shell was overlaid instead, which altered the design loads and the hall acoustics. The royal box was destroyed and its place was occupied by the orchestra box.

In 2002, at the initiative of Directorate of the circus and with support of municipal authorities, reconstruction of sculptural and stucco decoration of the façade was initiated. By September 2003, the risalit façades were restored to their historical appearance. The name of the circus founder – Gaetano Ciniselli – reappeared on the building. 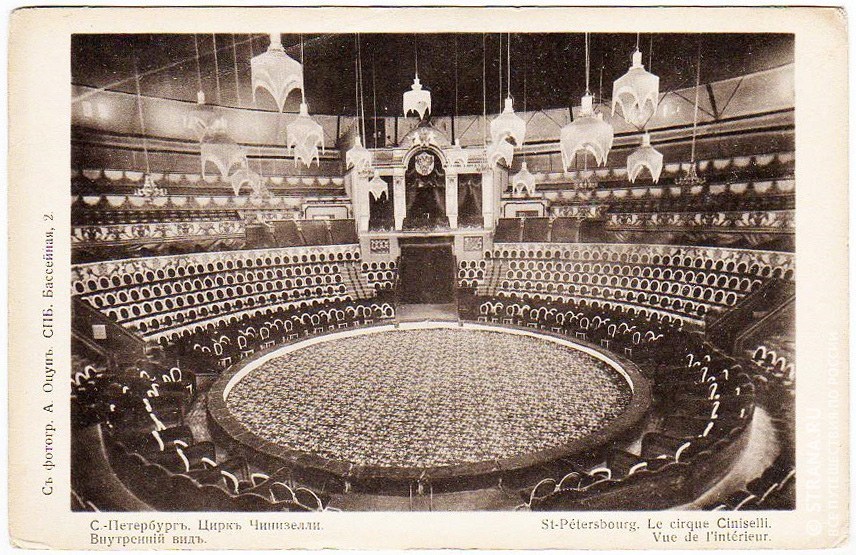 In April 2014, Committee for the State inspection and protection of historic monuments assigned the building of the Saint Petersburg circus the status of an object of cultural heritage of regional importance, and it was soon closed for repair and restoration works. The reinforced concrete shell was dismantled from the historical dome and another one was installed, in order to fully take the load from the modern light and sound equipment. According to the historical iconography, the royal box and the barrier painting in the spectator hall were reconstituted. The sculptural decoration of the façade as well as the front lobby appeared again in all splendor.

The treasury of labor, legacy and culture. The world’s first “Museum of Circus Arts” is 90 years old

During the past 90 years, the “Museum of Circus Arts” in the St. Petersburg circus represented a treasury of ideas and accomplishments, while keeping at the same time the warmth of home for artists, where they are always welcome. They perceive it as family and willingly brought and bring here materials reflecting their creative work, collecting painstakingly the circus heritage. Until now, this is the only museum in Russia that simultaneously implements research, publishing and excursion activities. 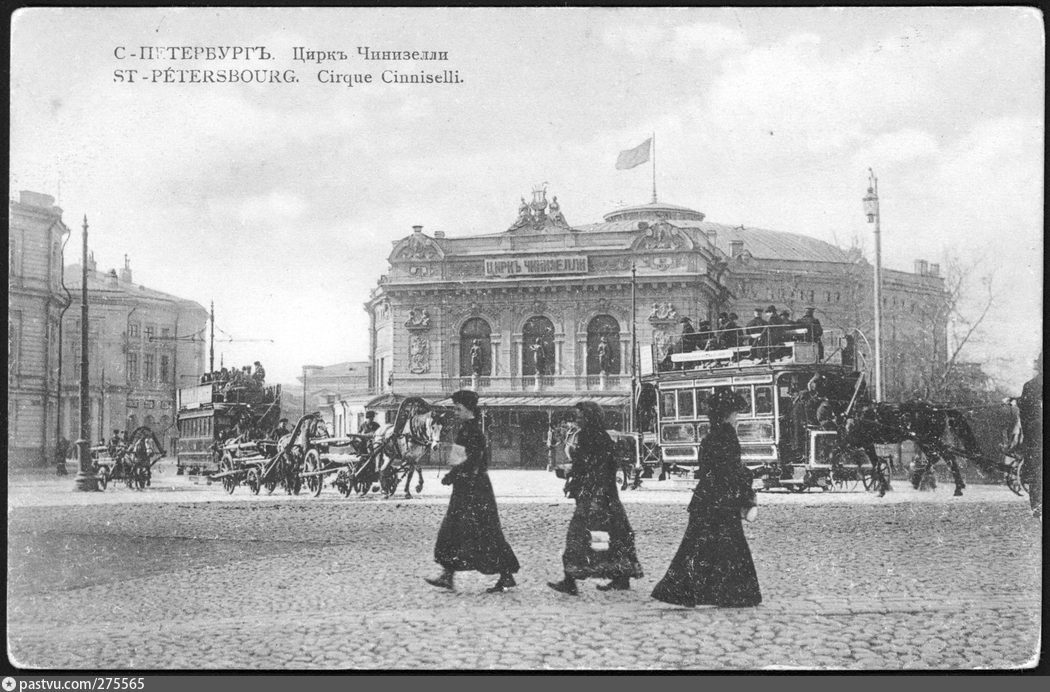 Since its foundation on August 8, 1928, the most important functions of the Museum are to find, collect, store, study and promote the world circus heritage. Circus representatives from different countries welcomed the birth of the world’s first Museum of Circus and Variety (as it was called in the first years), congratulated our country and its creator, Vasily Yakovlevich Andreev, on this unique event. Hans Sarrasani, director of the largest German circus, wrote in 1933: “It is somehow reassuring that there exists at least one place that systematically collects documents related to my enterprise. The materials stored in your museum will undoubtedly gain historical significance over time”.

As early as in the 1920s, it was hoped that the Museum would become a kind of springboard for lifting circus art to the heights of artistry.

V.Ya. Andreev wrote in his diary: “My dream is that the Circus Museum would be neither a storehouse, nor a cemetery, but a live source of creativity for circus people and artists of all genres of the arena, so that during the Museum’s meetings artists got inspired, studied and enriched their repertoire.” And indeed, from the very first day of its existence, it made an irreplaceable creative laboratory, where artists found inspiration, perfected and created new acts. Its current collection lists over 130,000 depository items and consists of a library, photo- and video libraries, collections of paintings and drawings, decorative and applied arts, sculpture, posters, programs, costumes and stage props, as well as department of manuscripts. 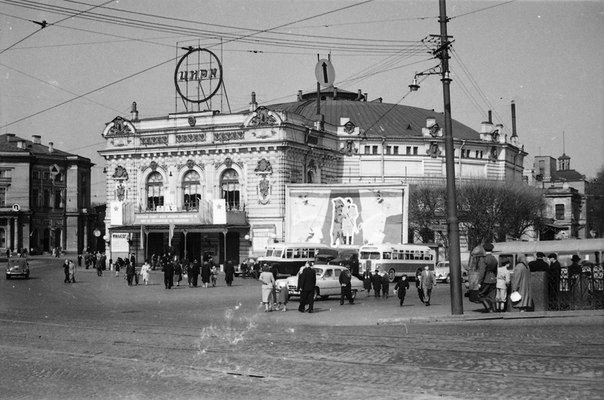 Already in its early years, the Museum organized short-term exhibitions in the circus buildings and mobile exhibitions dedicated to the ongoing circus programs at factories and plants. At present, there is hardly any space in the Circus on Fontanka without a piece of history taken from the Museum. Expositions are placed both in the backstage, for artists and circus staff, and, surely, for the audience. The exhibition hall on the first floor holds a thematic exhibition created for every new circus program. The extensive exhibition “Colors of the arena” is located on the second floor; it is dedicated to the history of the Russian circus costume and has thematic sections by circus genres: magic art, equilibristics, clowning, animal training, acrobatics, juggling, and aerial gymnastics. In total, there are over 50 costumes and over 120 drafts made by famous painters in the 1930-1970s, as well as artists’ props, paintings and sculptures. The art installation “Gaetano Ciniselli’s Dream” on the ground floor draws a surrealistic picture of the Maestro’s dream, where memories, people and documents from his life are collected and where the authentic memorial 3D objects interact with those 2D – unreal. The sheets with design drawings and engravings are intertwined with the stage characters and the mirror reflects magically the family members of the founder and the first director of the St. Petersburg circus. The exhibition “Circus through the eyes of artists” located in the backstage familiarizes artists and staff employees with the works of graphic artists of the early and mid-XXth century, including those by E.V. Zvontsova who devoted about 300 works to the Leningrad circus.

The Museum welcomes not only the artists, but also all people who love and are interested in circus art, or are yet getting to know it. For 90 years, visitors of various ages discover here something new for them. For instance, the Museum exercise session “Countless talents of the circus arena” is based on art mediation and art therapy principles that evolve actively in our country. Its aim is to develop a versatile perception of the circus art by introducing to visual arts and the magic of authentic museum objects, as well as to release one’s own creative capacity through drawing with sawdust – the most iconic circus material.